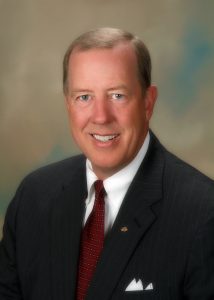 In 2010, Rick began his certification as a Mediator and Arbitrator.  He has extensive training in both Arkansas and Texas, and is certified for Civil Mediation & Arbitration matters, Domestic Relations matters, and/or and Probate matters. He is has been involved in an active mediation and arbitration practice since 2011, most recently opening Ramsay Mediation & Arbitration in June of 2016.

Early in his career, Rick realized the importance of “giving back” to his profession and has been extremely active in the Arkansas and American Bar Associations.  He served as Chairman of the Arkansas Young Lawyers Division in 1985, was President of the Arkansas Bar Association in 2007-08, President of the Southern Conference of Bar Presidents in 2007 and has served as the Arkansas Bar Association Representative to the House of Delegates of the American Bar Association since 2012.  Rick served on the faculty of the Arkansas Professional Practicum. He is also a Fellow of the American Bar Foundation; an honorary organization of attorneys, judges, law faculty, and legal scholars who have been deemed by their peers to have demonstrated outstanding achievements and dedication to the welfare of their communities and to the highest principles of the legal profession, which limits its membership to one third of one percent of lawyers licensed to practice in each jurisdiction.

Rick has been recognized by Arkansas Times as a Best Lawyer in Arkansas for Bankruptcy and Creditor/Debtor Rights and Insolvency & Reorganization Law;  chosen by BEST LAWYERS for his high caliber of work in the practice area of Commercial Litigation and in Bankruptcy and Creditor Debtor Rights/Insolvency & Reorganization Law each year since 2005; selected by peer recognition and professional achievement to the Mid-South Super Lawyers list; and earned a BV Distinguished rating from Martindale Hubbell for being widely respected by his peers for high professional achievement and ethical standards

Rick has been married to his wife, Clair, for 26 years and they have four children;  Jimbo Ramsay, Liz Ramsay Dalton, Alex Graham and Clancy Graham Rodgers, and three granddaughters.